"He literally subdued the audience with his musicality

Internationally acclaimed guitarist Vladimir Gorbach has captivated audiences across Europe, Australia, the United States and his native country of Russia.

His international success began when he was accepted into the Yehudi Menuhin Foundation Live Music Now outreach program. He then went on to win ten international guitar competitions and prizes in Spain, Italy, Germany, Portugal, Greece and most recently, in the United States at the 2011 Guitar Foundation of America, leading him to a fifty concert tour throughout America, including at Carnegie Hall, NY; Canada, Mexico, South America, and China, in addition to a publication with Mel Bay and recording for Naxos label that is distributed worldwide.

He began his guitar lessons at an early age in the class of Professor Yuri Kuzin at the State Music School in Novosibirsk and later with Arkady Burkhanov at the Glinka Conservatory. He continued his studies at the Music Academy in Cologne, Germany with Roberto Aussel. 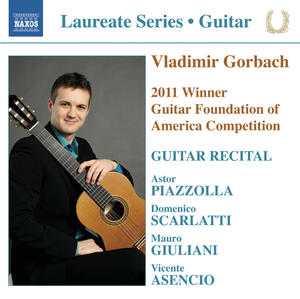