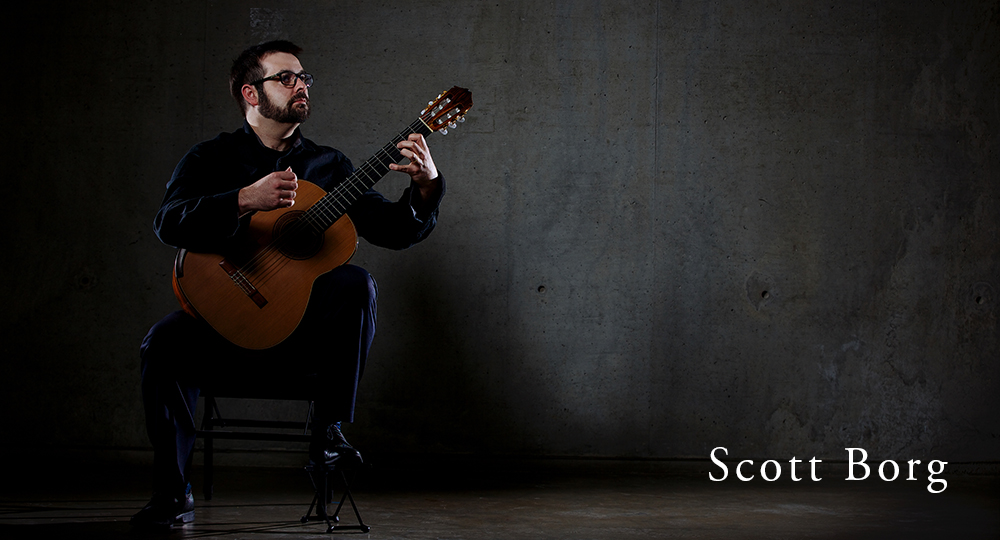 Praised as having “enormous facility on the guitar, a fluent technique, who plays with total confidence and professional expertise, panache and artful spontaneity”, Australian guitarist Scott Borg performs extensively as a soloist and chamber musician, and is known for his refined and daring performances. With a string of international scholarships and prizes under his belt, including the Australian Music Examinations Board highest honour, the Fellowship in Music Australia (F.Mus.A), his previous engagements have included performances at the Festival Internacional de Guitarra Mérida (Mexico), ICPNA Guitar Festival (Peru), the Shell Darwin International Festival (Australia), New York's Apollo Theatre and Alice Tully Hall in the Lincoln Center, the Kennedy Center, the Ateneo de Madrid, and performed for the Westminster Kennel Club. In 2006 he was invited to perform for President Hu Jintao, Peoples Republic of China, at his internationally televised address to the United States of America. As a winner of Artists International, NY Concert Review described his Carnegie Hall debut as “well balanced, gracefully presented, and expertly played… each note was purposeful and focused, as was each rest.” His performances have been broadcasted on Australian and American radio stations including ABC Classic FM and NPR. He was also featured on MTV2.

Mr Borg began his guitar studies at the age of seven with his father, Victor, and was soon after accepted into the young artists program at the Sydney Conservatorium of Music. Currently a candidate in the Doctorate of Musical Arts program at New England Conservatory under the tutelage of Maestro Eliot Fisk, he received his Artist Diploma (Yale University), Masters of Music (The Juilliard School) and a Bachelor of Creative Arts with First Class Honours (University of Wollongong). His previous mentors have included Sharon Isbin, Benjamin Verdery, Gregory Pikler, and Christopher Keane. Mr Borg is currently on faculty at Montgomery College, and the Levine School of Music in Washington D.C., and is Director of the Boston Guitar Orchestra and the BCGS Guitar Orchestra. His Debut CD “Phases” will be re-released on the Odradek Label in 2015.