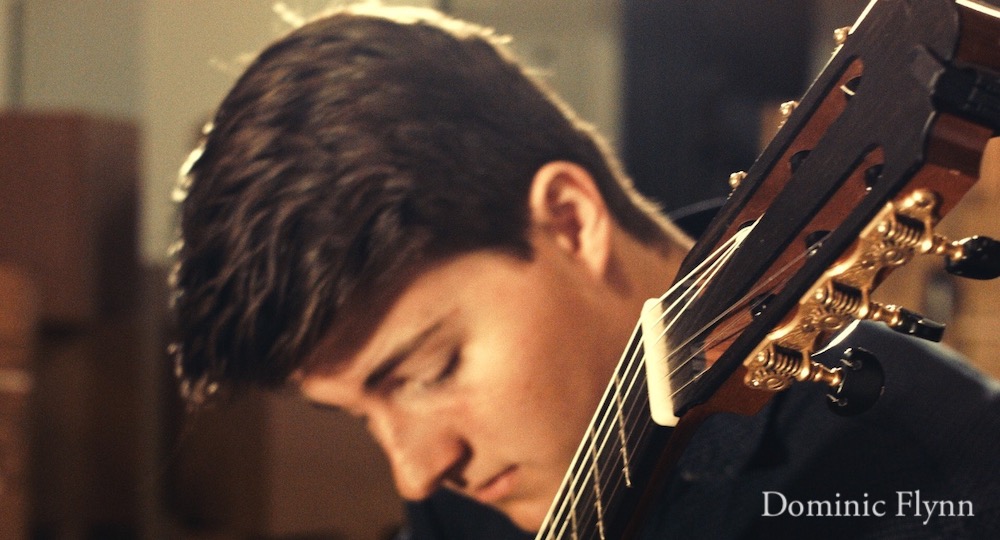 "With his strong classical competition-winning chops and love for jazz and composing, Dominic is the perfect fusion artist. You should hear him whenever you can!” - Scott Tennant

Chicago-born and raised Dominic Flynn began studying the classical guitar after receiving a nylon-string on his eleventh birthday. He continued his studies throughout high school at the Chicago Academy for the Arts, expanding his musical pursuits early into jazz improvisation, composition, and film scoring. In 2014, he won his first national competition as a classical guitar soloist: the national YoungArts competition.


In 2016 he placed second in his first international competition, the Lee Ritenour Six String Theory International Competition. Shortly after, Dominic moved to Los Angeles to pursue a bachelor’s degree in classical guitar performance from the University of Southern California, where he studied with Scott Tennant, Bill Kanengiser, Pepe Romero, Vince Mendoza, and Alan Pasqua. During his studies at USC, Dominic began developing his own approach to guitar playing, applying the physical techniques and musical influences of a variety of genres into the classical guitar.


Immediately after graduating, Dominic’s original music led him on an extensive tour of Europe, and after receiving a EuroStrings scholarship to the Festival Internacional José Tomás – Villa de Petrer, he went on to give multiple solo performances in Granada, Paris, London, and Berlin. He recorded his first collection of solo works for classical guitar with Open Strings Berlin and Siccas, and has since performed full sets of original music for his jazz sextet at the Blue Whale in Los Angeles. Dominic is a regular recording artist at Guitar Salon International. and has recently released a new set of original music attracting the attention of many international music festivals and endorsements.