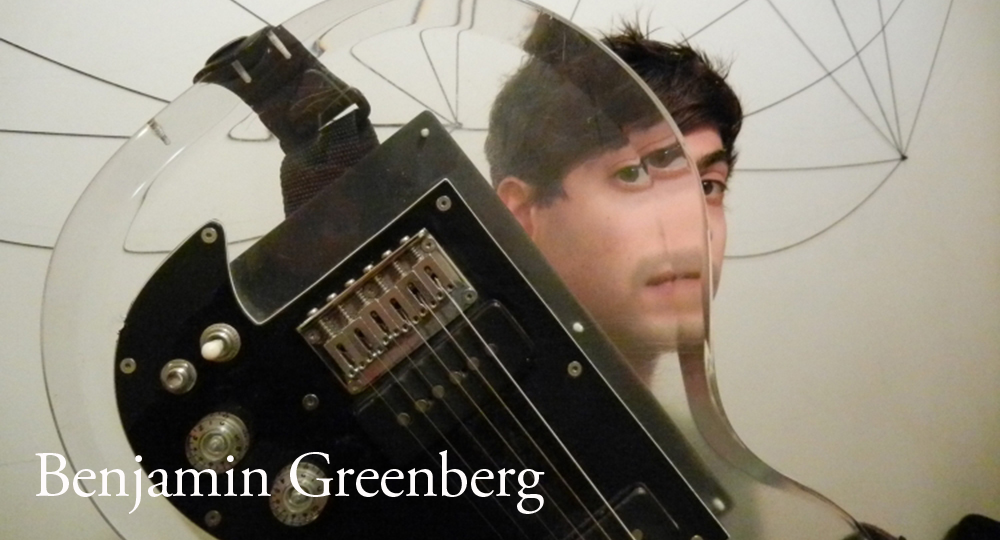 Benjamin Greenberg was born at Beth Israel Hospital at 16th street and 1st avenue in New York City on February 22nd, 1985. Six years later, he began studying music very, very seriously and has maintained that same level of intensity and focus ever since. Growing up in the city afforded young Ben a multitude of musical outlets once he was old enough to meet fellow musical travelers. By his estimate he has played in over 50 bands in his less than 30 years on this Earth. Among that list would be found lesser-known projects of yesteryear, such as The Fugue, Archaeopteryx, and The Jazz Standard Youth Orchestra, or better known and currently active bands of which he used to be a part such as doom-gloomers Bloody Panda, or free-jazz-bastards, Little Women. While attending the New School for Jazz and Contemporary Music, Mr. Greenberg joined NYC avant-mainstays Zs at the ripe old age of 21. His six-year tenure in the band taught him ohhhhh so much about sight reading, really high pitched guitar harmonics, Morton Feldman, and the place of the saxophone in contemporary music. At the same time, his Black Flag-cum-Flipper punk band, Cutter, was turning into his X-cum-No Trend punk trio, Pygmy Shrews, who then slayed many a soul in town and across the land. Both bands helped establish his reputation as a quite singularly-voiced guitar player, a ruthless and unashamed composer of tunes, songs and longer forms, and a visionary and resourceful recording engineer. These days Ben spends most of his time on the road with the band The Men, but still finds plenty of time to work on Hubble.