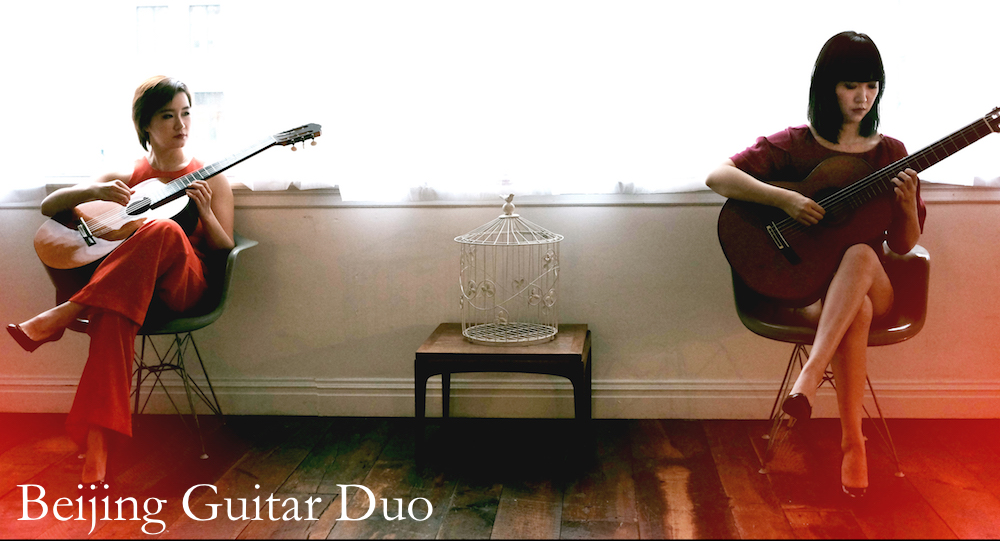 "The duo has been received with great acclaim in recent years—they’re fast getting the reputation as among the world’s finest... Their performance is exquisite—consistently joyous yet subtle, technically flawless, beautiful ." - American Record Guide

Composed of guitarist Meng Su and Yameng Wang, the Beijing Guitar Duo has performed around the world in halls such as the Concertgebouw, Palau de Musica, Tchaikovsky Hall and the National Theatre in Beijing. This season has taken them to concert tours in Canada, the United States, Australia, Europe and China. The duo regularly collaborates with orchestras, in ensemble with flutist Marina Piccinini, guitarists Grigoryan Brothers and with their mentor Manuel Barrueco, touring in Europe, Australia and the U.S.

The Beijing Guitar Duo's performances and recordings have impressed the public with “an ability and artistry that exceeds their years.” Their debut CD Maracaípe, received a Latin-GRAMMY nomination for the titled piece, which was dedicated to them by renowned guitarist/composer Sergio Assad. Their second CD, Bach to Tan Dun, has been widely noted for the world-premiere recording of Tan Dun’s Eight Memories in Watercolor, specially arranged for the duo by Manuel Barrueco. A recording in trio, China West, with Maestro Barrueco was released in May 2014.

Meng Su and Yameng Wang were born in the coastal city of Qingdao, China. They came to the partnership with exceptional credentials, including a string of competition awards. Ms. Su’s honors include victories at the Vienna Youth Guitar Competition and the Christopher Parkening Guitarist Competition, while Ms. Wang was the youngest guitarist to win the Tokyo International Guitar Competition at the age of 12, and was invited by Radio France to perform at the prestigious Paris International Guitar Art Week at age 14. Both young artists had given solo recitals in China and abroad, and had made solo recordings before they formed the duo.

In addition to concertizing, the members of the duo share a love for teaching which brings them to major conservatories in the world for master classes and to judge competitions. From 2011-15 they were Artists-in-residence for the San Francisco Performances which brought them to the Bay Area two weeks a year for community outreach, performances, and master classes in public schools as well as for the San Francisco Conservatory.