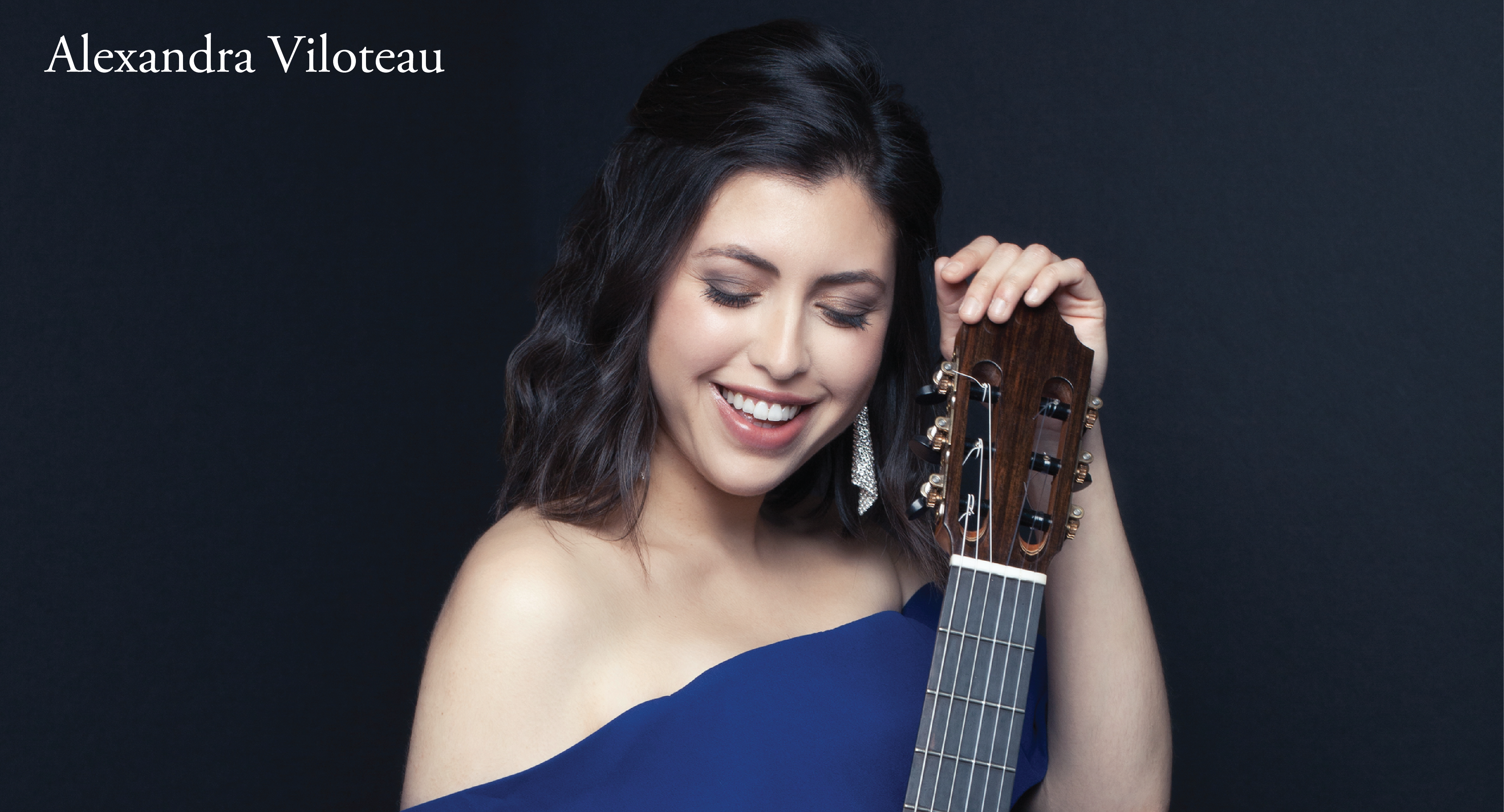 "Being not only a phenomenal classical guitarist, but also a soprano singer, she can

be her own duo partner and perform the most beautiful repertoire for voice and guitar by herself." - Open Strings Berlin

Internationally acclaimed classical guitarist and soprano Alexandra Viloteau is a rising star from California, USA. Hailed by the San Francisco Examiner as a “Song Stylist”, Alexandra stuns audiences with her virtuosic abilities as both classical guitarist and soprano with her charismatic artistry and genre defying repertoire. Described by the European film collective Open Strings Berlin as “...not only a phenomenal classical guitarist, but soprano singer, she can be her own duo partner and perform the most beautiful repertoire for voice and guitar by herself...”

Ranging from Brazilian fado, art song, early music, to new commissions; Alexandra does it all with remarkable versatility. Alexandra has commissioned over a dozen pieces for her unique abilities including GRAMMY award-winning composers Christopher Tin and Sergio Assad. Concerts and collaborations include performances with SFMOMA Ragnar Kjartanson’s exhibit, de Young Museum of Art, Berkeley Piano Club, Herbst Theater Green Room, Old First Concerts, Center for New Music, and has been featured on NPR KALW 91.7 FM affiliate “Revolutions per Minute”. She has released two chamber albums with acclaimed SopraDuo and One Great City Duo whom the San Francisco Examiner describes as an “innovative new duo.”

As a passionate educator, her students have thrived under her tutelage and have won top prizes in competitions and festivals. In 2018, Alexandra’s Advanced Guitar Ensemble from the California Conservatory of Music won first prize in the Guitar Foundation of America’s International Ensemble Competition. Her students have been accepted at top colleges and conservatories and gone on to pursue guitar performance. Alexandra has given masterclasses throughout the United States including Sonoma State University, UC Santa Cruz and San Diego State University. She is currently on faculty at the Levine School of Music in Washington D.C.

Alexandra earned a Master of Music and Professional Studies Diploma in Guitar Performance from the San Francisco Conservatory of Music, where she studied with Sérgio Assad and was awarded guitar department honors. She received her Bachelor of Music degree in Guitar Performance from the Peabody Conservatory of Music of the Johns Hopkins University where she double majored in classical guitar and classical voice. She was the only student in the Peabody Conservatory's 157 year history to do so.

Born and raised in Los Angeles, California, Alexandra remains a true Californian at heart wherever she goes. She loves the beach, avocado toast, and a good glass of Napa wine.