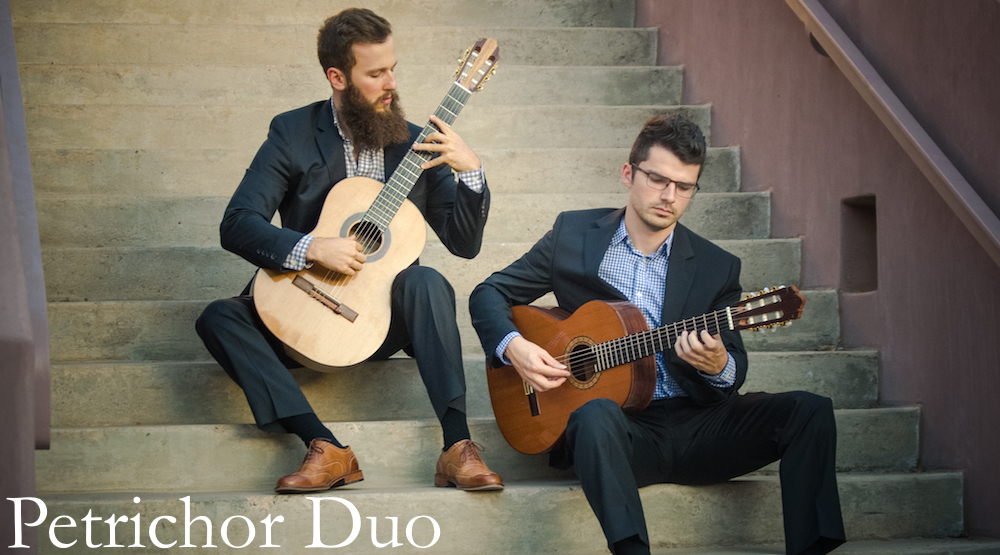 “John Oeth and Andrew Smith are both exceptional solo artists in their own right, but as a duo their combined talents result in a truly magical blend of musical expression and artistry. They are a wonderful ensemble and a joy to hear.” – Frank Koonce

Petrichor - a pleasant aroma that accompanies the first rain after a long period of warm, dry weather.

Guitarists John Oeth and Andrew Smith formed Petrichor Duo while they were Teaching Assistants pursuing graduate degrees at Arizona State University. Already accomplished solo artists, they were united by a common passion for unique new guitar music with popular appeal, and before long they dedicated themselves to the art of chamber music. In addition to studying together under the renowned pedagogue Frank Koonce, they have collectively performed in masterclasses for distinguished ensembles such as SoloDuo, the Los Angeles Guitar Quartet, Newman & Oltman Guitar Duo, and Kithara Duo. Petrichor Duo brings expertise and chemistry to recently composed music and works written specifically for them. Compositions have been dedicated to them by international artists including Petrichor, a piece gifted to the duo by Japanese composer Kohei Kondo.

A Petrichor Duo concert features these cutting edge compositions alongside spur-of-the-moment improvisations. They have recently performed on the concert series of arts organizations such as the Phoenix Guitar Society, Oh My Ears, and Spirit of the Senses. They have also given private performances for notable organizations like NPR, the NCAA, and Intel. Successful concerts in Phoenix for the Tempe Arts Center, Musical Instrument Museum, and the David Lloyd Wright House have built up Petrichor Duo’s reputation for making sophisticated art music accessible to audiences of all musical backgrounds. This has led them to unique performance opportunities such as sharing a concert with Billboard Top 100 artist Jordin Sparks. In 2017, the governor of Arizona invited the duo to perform for the governors of many other US States. In 2018, Petrichor Duo was honored to perform for United States Senator John McCain's funeral service.