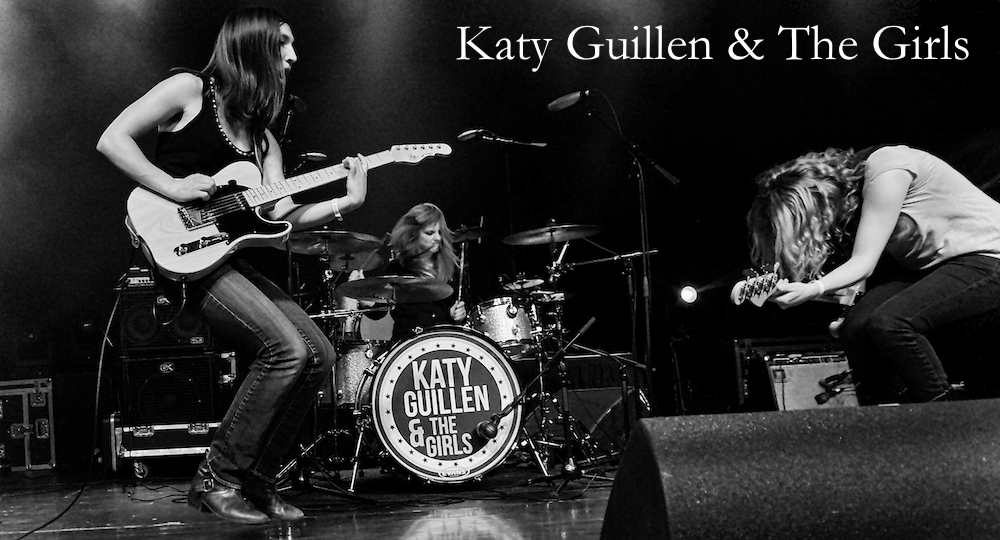 Folks, this is fresh Rock & Roll that manages to remind me of why I was excited by Rock & Roll in the first place. It makes me feel good to be alive. I am not sure that I can find a better compliment within me than that." - Don "T-Bone" Erickson, KFMG 98.9FM, Des Moines

On the dawn of their sophomore album release Heavy Days, Katy Guillen and the Girls have established themselves as an authentic, authoritative rock band. They are known to pack in crowds at blues roadhouses and prominent concert venues alike, supporting major touring acts or headlining festivals and bills of their own. In their short time as a band, the trio has shaped their own musical identity, rooted heavily in the blues but taking cues from the timeless guitar riffs of Jimi Hendrix to the visionary songwriting of Patty Griffin and the indie rock revivalist sound of Heartless Bastards.

Propelled by a loyal contingent in their hometown of Kansas City and an impressive showing as finalists at the 2014 International Blues Challenge in Memphis, Katy Guillen and the Girls have since taken their vivacious brand of blues rock to stages across the globe. In addition to a persistent cross-country performance schedule, they’ve accepted invitations to play the Montreal International Jazz Festival (July 2014) and Joe Bonamassa’s Keeping the Blues Alive At Sea cruise (February 2015). In November 2014, they were sponsored by a cultural development organization (Kultur i Väst) to take a 10-day tour of Sweden. Most recently, they opened for The Doobie Brothers at the Foundation for the Children of the Californias’ annual benefit concert in San Diego (October 2015). They have also become one of Kansas City’s most sought-after groups, earning prestigious slots at local festivals like Middle of the Map Fest and Boulevardia, and routinely selling out 500-plus-capacity venues.

Though the band formed less than 4 years ago, it took root when Guillen first picked up the guitar at the age of 8. At 14, she began participating in blues jams around Kansas City, and within a few years she was a featured guest with local blues legends like John Paul’s Flying Circus. By 2010, she was writing songs and collaborating with veteran drummer Go-Go Ray, with whom she released her first album, When I Get Away.

In September 2012, Guillen was offered an opening slot for Royal Southern Brotherhood at renowned Kansas City blues venue Knuckleheads Saloon, but at the time didn’t have a backing band. When she enlisted the talents of bassist Claire Adams and drummer Stephanie Williams, an immediate chemistry formed that would eventually push her songs to new heights. Not content to simply hold down the beat, Williams brings a signature melodic percussive voice to the group, compelled by her rock influences and experience in jazz ensembles. With Adams’ instincts as a multi-instrumentalist and composer, her impeccable bass lines and backing vocals are an ideal complement to Guillen’s searing, commanding guitar licks. While Guillen’s years as a seasoned blues guitarist—along with her education in flamenco guitar style—have informed her songwriting, the group’s collective strengths lend an immediacy to her songs while elevating and substantiating her earnest lyrical delivery.